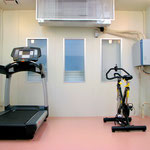 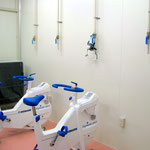 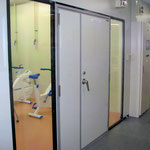 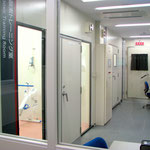 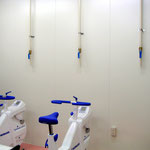 The hypoxic system has been developed for the purpose of research on the relevant mechanism between environment and biological object. The hypoxic system shall make it possible to perform the experiment under the hypoxic environment by artificially setting up such high altitude as 0m~500m level in controlling hypoxic conditions at ordinary pressure .

Recently, in the field of Sports Science, many study and research have been conducted for exploring the effect as to how the high altitude condition could influence in enhancing exercise capacity. Especially the hypoxic environment controlled room in flatlands has gathered good attention in such study. From the standpoint of environmental aspects, there is a difference in atmospheric pressure between flatlands where we normally live and high altitudes, that is, the higher the altitude, the less atmospheric pressure we get. As the highlands are under low-oxygen conditions in compared with flatlands, we suffer from anoxic conditions inside the body. However the human body can be adaptable to such environment so as to try to get more oxygen through scaling up cardiac activity & breathing and eventually the oxygen-carrying power can be strengthened as result of increase of red blood cell and hemoglobin. Such body function can produce active effects in enhancing exercise capacity. There are 2 kinds of hypoxic room system. One is the low-pressure (decompression) hypoxic room system under the reduced partial pressure of oxygen by way of depressurizing the atmospheric pressure. Another system is the atmospheric-pressure hypoxic room system which can reduce the concentration of oxygen by increasing nitrogen concentration available in the atmosphere. This system was pioneered in Finland. As we shall attach importance of the safety, our system is the atmospheric-hypoxic system so that the oxygen concentration can be reduced through aeration of nitrogen which will be produced by the nitrogen generator. Moreover our system is so safety-conscious that the oxygen concentration is measured by the high efficiency oxymeter. In the medicine on physical exercise area, various studies have been conducted on how to enhance competitive abilities on the training and living by using the hypoxic room system. To our utmost delight, the hypoxic system has much contributed to the great success achieved among the Japanese athletes in the 2004 Athens Olympics. Additionally the hypoxic system has proved to be of good use for the rehabilitation of the injured athletes, because the higher level of enhancing both muscle and cardiorespiratory function could be achieved without doing heavy physical exercise under the hypoxic environment system. Hence as far as athletes will continue the training under hypoxic environment, the system will be prospectively recommendable that the load imposed on athletes' muscle will surely be less and also the disease-causing 'radical oxygen' will be reduced. Under the afore-mentioned circumstances, the atmospheric hypoxic system will be expected to be applicable to such fields for much higher public benefit as the study & research on strengthening competition power in sports as well as the medical rehabilitation and so forth.

for specific installation and experimental conditions.

*For more detailed specification, please contact us for our catalogue and data.